Why Exactly Are Timeshares So Terrible? 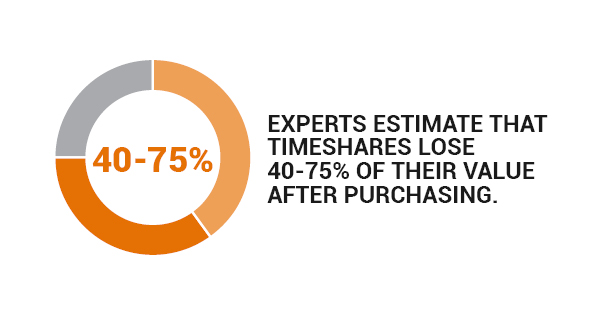 At first blush, buying a timeshare might seem like a great idea. But even though timeshare sales have been around in the U.S. since the late 1960s, their historic significance doesn’t mean they’re a good financial move. In today’s post, we’ll break down exactly why timeshares are a poor economic decision — and why hiring a timeshare lawyer is often necessary.

You’ll never make money off a timeshare. In fact, you’re bound to lose money
One of the most important things to understand about timeshares is that they are not like regular real estate. With a home, your investment can increase in value over time. But a timeshare is a lot like a car; it depreciates in value as soon as you purchase it. Timeshare resales are never profitable. Actually, you’ll probably find it impossible to even break even. Not only can you not rent out your timeshare when you aren’t using it (like you could with a vacation rental), but experts estimate that timeshares lose 40-75% of their value after purchasing. On top of that, you’ll have to pay significant maintenance fees every year. Ultimately, that translates into lost money with no real way to recoup value.

You’d be much better off renting or booking a hotel
Part of the timeshare allure is the opportunity to have access to a vacation property without the costs and commitment associated with it. But when you actually break down how much you’d pay for a timeshare versus other vacation options, you might be surprised to learn just how bad of a financial choice timeshares are. Even if your timeshare cost only $10,000 upfront and had a $700 annual maintenance fee, you’d end up paying $17,000 over the course of a decade. Now, consider that timeshare owners can stay at the property for only one week out of the year (typically, seven days and six nights). That equates to 60 nights total over 10 years, costing $283 per night. That’s probably more than you’d expect to pay to stay in a nice hotel room in the same location. In fact, you could probably afford 100 nights of stays for the same or less money than you’d pay to stay in a timeshare.

While you may think owning the property for a week is somehow economically better than staying in a hotel, you’ll actually get a lot less for your money. For most people, owning a timeshare is actually a real detriment to their finances. Although we usually say it’s better to own than to rent, in this case, it’s simply not true. You’d get far more for your money by choosing a different way to vacation.

Once they’re in, everyone is looking to get out
It’s no surprise, then, that people who choose to buy a timeshare will later realize their mistake. Not surprisingly, most people find the financial strain of a timeshare to be unsustainable. In fact, 56% of reclaimed timeshares (which are properties that return to the developer) are linked to foreclosure. To make matters worse, more and more timeshare owners are younger — and are therefore less economically secure and experienced — than they used to be; the industry was initially geared towards seniors, but now, the median age of recent timeshare buyers is only 39. In addition, these owners are more ethnically diverse than in the past, as 34% of owners are either Asian American or African American. And considering that the median income of these buyers is $81,311, it’s likely that they may not have the finances to support the cost of a timeshare (which can be anywhere from $20,000 to $40,000 for just one week’s use).

But most people need help getting rid of a timeshare
Although it’s best to avoid buying a timeshare altogether, there may be ways to free yourself from this agreement. Timeshare cancellation law is extremely complicated. That’s why so many people enlist help from a timeshare lawyer. A timeshare lawyer can help you navigate the process and get your life back on track. For more information about how our timeshare lawyers may be able to help you, contact us today.

It is very important that you understand the way a timeshare rescission period works. Many companies will attempt to take advantage of you and prevent you from rescinding your contract. Generally, a rescission period does not last longer than ten days, so it’s crucial that you understand your right to cancel when signing your contract... See Below >

What a relief!! Five stars plus!!

Posted by Mark, a Arbitration client, 8 years ago

In an industry rife with corruption, Susan Budowski is a Godsend. I’ve spent years and thousands of dollars falling for every scam to get rid of my timeshare. After countless hours of research, I finally found Susan. Professional, personal, upfront, my timeshare issues were resolved immediately!! What a relief!! I’m just sorry there’s only 5 stars available on this rating! Five starts plus!!

Posted by MB, a Contracts client, 8 years ago

Susan Budowski provided excellent service in every respect. She listened carefully to our problem with a difficult timeshare corporation. She gave us an accurate assessment of our case & cautioned us that she could not *guarantee* success. After that, she never flagged in her attentive and active pursuit of justice for us. AND SHE WON!! We received a full refund for what was due to us. Let me repeat: she listened actively. She was patient and listened to my emotional state over the situation. When she didn’t understand something, she said so and communicated until she did understand. She was fully intellectually engaged. She is a woman who is fully committed to justice and rights of the individual in relation to a large corporation. She provided us with great representation. I recommend her highly.

Posted by Marty, a Real Estate client, 8 years ago

My husband and I for years tried several methods to get released from the timeshare obligation, none of which worked. After contacting Susan Budowski, within 2 months our troubles with timeshare ownership was over.