How Do I Cancel A Timeshare Contract In The State Of Florida? 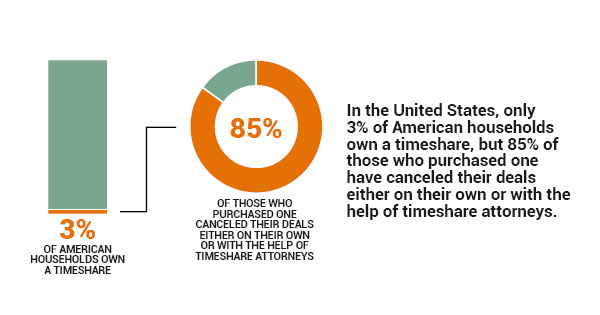 The timeshare industry is considered controversial, with buyers often feeling they were scammed, duped, or given a hard sell. In recent years the timeshare industry has grown an especially awful reputation what with high priced units, faulty sales experiences, poor flexibility, and fraud cases.

In the United States, only 3% of American households own a timeshare, but 85% of those who purchased one have canceled their deals either on their own or with the help of timeshare attorneys. However, in order to effectively cancel your timeshare there are some things that you need to know in order to get what you deserve. So here we explain what you need to know when it comes to canceling your timeshare contract in the state of Florida.

How long do I have to cancel my timeshare contract?

What do I include in the cancellation notification?

When canceling the timeshare contract in writing, it’s essential that you include the following information:

Timeshares are notoriously difficult to get out of, which is just one of the reasons why they have such a terrible reputation. If you’re struggling to get out of a timeshare, it may be in your best interest to contact Florida timeshare attorneys for a professional opinion. Contact My Timeshare Attorney today for a free consultation.

It is very important that you understand the way a timeshare rescission period works. Many companies will attempt to take advantage of you and prevent you from rescinding your contract. Generally, a rescission period does not last longer than ten days, so it’s crucial that you understand your right to cancel when signing your contract... See Below >

What a relief!! Five stars plus!!

Posted by Mark, a Arbitration client, 8 years ago

In an industry rife with corruption, Susan Budowski is a Godsend. I’ve spent years and thousands of dollars falling for every scam to get rid of my timeshare. After countless hours of research, I finally found Susan. Professional, personal, upfront, my timeshare issues were resolved immediately!! What a relief!! I’m just sorry there’s only 5 stars available on this rating! Five starts plus!!

Posted by MB, a Contracts client, 8 years ago

Susan Budowski provided excellent service in every respect. She listened carefully to our problem with a difficult timeshare corporation. She gave us an accurate assessment of our case & cautioned us that she could not *guarantee* success. After that, she never flagged in her attentive and active pursuit of justice for us. AND SHE WON!! We received a full refund for what was due to us. Let me repeat: she listened actively. She was patient and listened to my emotional state over the situation. When she didn’t understand something, she said so and communicated until she did understand. She was fully intellectually engaged. She is a woman who is fully committed to justice and rights of the individual in relation to a large corporation. She provided us with great representation. I recommend her highly.

Posted by Marty, a Real Estate client, 8 years ago

My husband and I for years tried several methods to get released from the timeshare obligation, none of which worked. After contacting Susan Budowski, within 2 months our troubles with timeshare ownership was over.